The wacky marsupials are back, and just in time! Nefarious villains Neo Cortex and Doctor N. Tropy have escaped their interdimensional prison and set a course to conquer the multiverse.

Join Crash, Coco and friends in an all-new adventure featuring new powers, new worlds, larger-than-life boss battles, and a whole lot more when Crash Bandicoot 4: It’s About Time will be optimized for Xbox Series X|S. And if you already own the Xbox One digital version of the game, you can upgrade to the Xbox Series X|S version of Crash Bandicoot 4: It’s About Time at no additional cost thanks to Smart Delivery when the title update is available to download on March 12.

Jump, spin, and smash through this single-player adventure as Crash or Coco with new gameplay mechanics like wall running, rail grinding, and rope swinging. Further enhance your powers with the addition of Quantum Masks, giving the bandicoots even more abilities to stop Neo Cortex and save the multiverse.

Experience the classic precision platforming that the series is known for alongside a variety of improvements and upgrades to satisfy new players and longtime fans alike.

Crash Bandicoot for the Modern Era

For those playing on Xbox Series X, Crash Bandicoot 4: It’s About Time will have enhanced 4K resolution, faster loading times, and more! And you can play the way you want to by choosing Modern or Retro mode for that classic gaming experience — where if lose all your lives, you restart the level.

Bend reality with the four Quantum Masks — guardians of space and time — like Lani-Loli, who phase-shifts obstacles in and out of existence, or Ika Ika, whose power flips gravity allowing Crash and Coco to walk on the ceiling! Experience the story in new ways with alternate timeline paths, revisiting previous levels using different characters — like nefarious villain Neo Cortex and the reformed Dingodile — and more difficult platforming challenges. And test your skills in the new N. Verted mode, a wild take on mirror mode that flips levels and delivers new filters and effects across dimensions.

Crash Bandicoot 4: It’s About Time will be optimized for Xbox Series X|S via a title update (up to 25GB) for existing owners of the digital Xbox One version of the game on March 12. Can’t wait until March 12? Then pick up the Xbox One digital version on the Xbox Store to start playing now. Once the Xbox Series X|S version is available, you’ll be upgraded at no additional cost via Smart Delivery. Getting the game digitally also nets you the Totally Tubular Skins (available upon completion of the second level), which put Crash and Coco into some digs that shows off their radical 90s roots.

Players who own a disc version of Crash Bandicoot 4: It’s About Time must own an Xbox Series X console. Owners of a Xbox One disc copy must insert it into the Xbox Series X every time they want to download or play the Xbox Series X optimized version. For full details, visit the FAQ page. 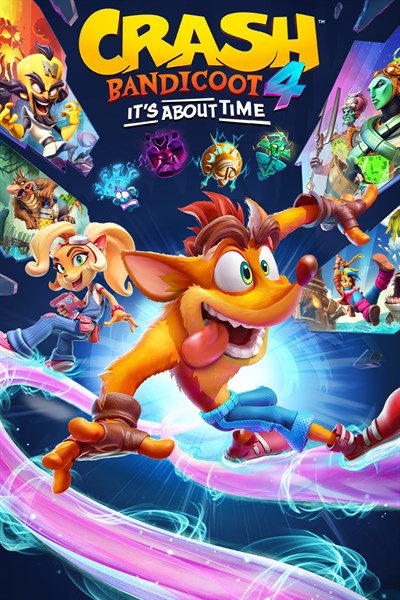 It’s About Time – for a brand-wumping new Crash Bandicoot™ game! Crash fourward into a time shattered adventure with your favorite marsupials.

Neo Cortex and N. Tropy are back at it again and launching an all-out assault on not just this universe, but the entire multiverse! Crash and Coco are here to save the day by reuniting the four Quantum Masks and bending the rules of reality.

*Available upon completion of the second level.

Online leaderboards and Activision account registration require internet connection. Storage requirements subject to change. Mandatory updates may be required to play. Activision makes no guarantee regarding the availability of online features and may modify or discontinue those at its discretion without notice. Using the software constitutes acceptance of the Software License & Service Agreement and Privacy Policy available at support.activision.com/license.